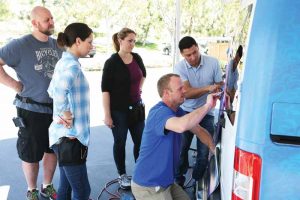 By their fourth year, Richart and Fowler felt their business had grown large enough to support hiring an employee. “It’s a really big decision to bring someone onboard,” said Richart. “The biggest fear is, will we be able to pay this employee?—Not just their first paycheque, but also further down the line.”

Even after they had hired their first staff member, it was challenging for the owners to incorporate someone new into their business. Richart explained he and Fowler had to learn to “let go of the reins,” and allow their employee an opportunity to learn from his mistakes. “It’s hard to do so, but people learn by trying things themselves, and sometimes it takes a few attempts,” said Richart. Interestingly, their first employee is still working with them.

Today, with 12 team members, Richart and Fowler are much more experienced at hiring and managing staff. The industry has also grown to the point where a large number
of job applicants have some experience or training in wraps.

When hiring new employees, they use a probationary period to find a successful match. This trial period gives the staff member a chance to see if they enjoy the work and the environment. “We work closely, and the fit has to be right, not only for the employee, but for us as well,” said Richart.

Learning to say “no”

Richart acknowledges it took them a long time to begin saying “no” to projects they did not feel wholeheartedly about. Like many shop owners, they were concerned about the repercussions of turning down business. “You don’t want to risk losing a customer,” he said. “When we finally learned to say ‘no,’ we actually became profitable.”

“Now I tell people, we don’t wrap motorcycles, but here’s the cost if we do,” said Richart. “We factor in the time it takes to complete every job.”