In addition to recognizing how vehicle graphics could transform the overall appearance of cars and convert vans and trucks into mobile ad verts, they also

The wraps industry has come a long way ever since Matt Richart and Dallas Fowler first started their vehicle wrap company, Digital EFX Wraps, in Louisville, Ky., in 2004. Barely 27 years old, but already sign industry veterans, the duo were ready to take on new challenges. In addition to recognizing how vehicle graphics could transform the overall appearance of cars and convert vans and trucks into mobile adverts, they also saw vast opportunities in designing and installing these graphics as a lucrative business prospect. “We figured there’s a lot more return on investment (ROI) from vehicle graphics than yard signs,” said Richart. 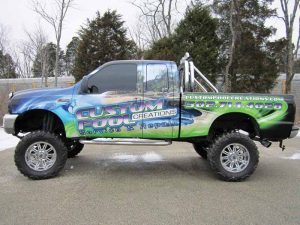 A lot of vehicle wraps look stunning from a distance, but the true measure of a wrap is in its print quality and what it looks like up close.

Once they were able to find a financial sponsor, Richart and Fowler bought a printer, plotter, and a few computers, following which, they figured out the best way to wrap vehicles.
“In those days, there weren’t a lot of training materials. We had a six-minute DVD by media manufacturer 3M, showing an install on a van,” said Richart. “We watched it over and over.

“Back then, we mostly learned by trial and error. We informed our clients this was a new process, and we would need their vehicle for five to six days, so we could ensure we got it right.” For the first three years, the company co-founders worked by themselves, each putting in 70 to 90 hours a week, fine-tuning their skills and expanding their list of clients.

From the start, Richart and Fowler consciously put their efforts into producing quality over quantity. As Richart explains, “We’re still not the fastest wrappers out there, and we don’t claim to be. But we stand by what we install.”

You May Also Like  Last Impression: Designing head-turning vehicle wraps

“Instead of telling someone what you do, show them. That’s the power of a wrap,” said Richart. “We love what we do, we love the industry, and best of all, we love seeing the business our wraps generate for our customers.”