Time for a new vision 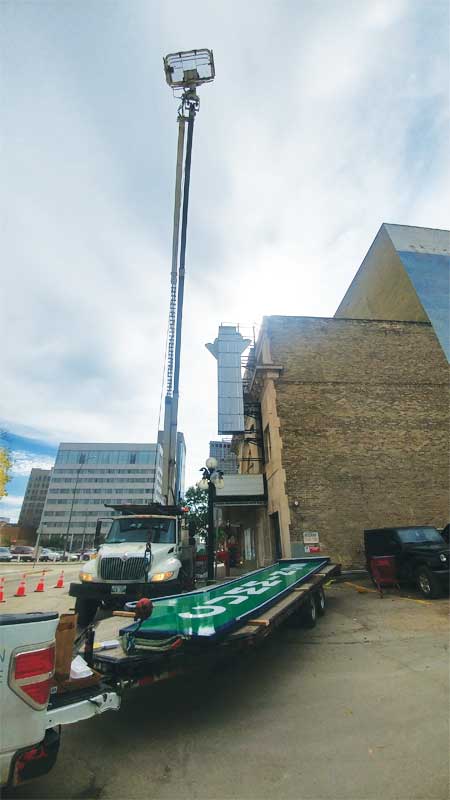 Once the fabrication of the sign was completed, it was transported to the site for installation.

“It was definitely time for a refresh,” says Derrick Amy, director of operations. “The previous neon sign, which they temporarily covered with a banner, had rusted through and was in very poor shape by the time we came along. Most of it could not be reused, except for the original steel structure.”

Josh Dudych, True North’s director of creative and marketing services, asked the SRS team for practical advice about how a new marquee might be built and attached while retaining the original appearance of the theatre’s canopy. His vision was for the sign’s shape to resemble that of the province of Manitoba on a map. For this concept to work on a two-sided sign, SRS suggested dividing two single-sided sign faces with a grey backing, so each side was disguised from the other.

“We had worked with True North before, custom-fabricating fixtures for Bell MTS Place,” Amy explains. “After our initial discussions with Josh, we were selected for the job in spring 2017. It was because he had pitched the idea earlier that I knew we could do the work within the timelines. The deadline was Sept. 22, as Cummings’ first new benefit concert was scheduled for Sept. 23.”

The fabrication of the new marquee was, in some ways, representative of changes in the sign industry over the years.

“We used to be a 100 per cent tin shop, but have changed over to 90 per cent aluminum in the last five years or so,” says Amy. “Similarly, the theatre’s old sign was galvanized, painted tin, but we used painted aluminum sheeting this time for the front, back and sides of the marquee, to present an exterior finish that looks true to the era and is built to last. Everything is durable and reinforced.”

As for illumination, the changeover offered the first opportunity to use LEDs on the building. SRS specified white and green border tubing from Global Lux in Boucherville, Que., to add an ‘old Broadway’ feeling to the sign.

“We used LED ‘ropes’ that reproduce the look of neon,” says Amy, “but neon always sucked in Winnipeg anyway because of our weather!”

The white letter faces and dark sign face, meanwhile, were made using Acrylite acrylic polymers. “The acrylic has a seven-year life expectancy before it will need to be replaced,” says Amy. 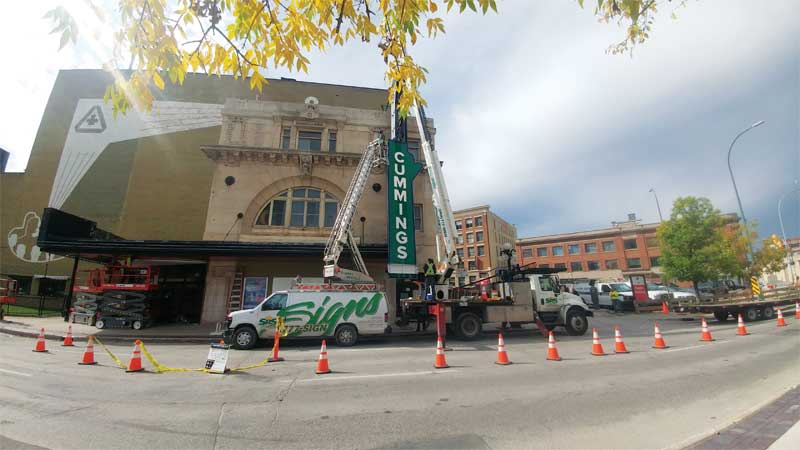 Installation took place by day while demolition continued at night.

Following client approvals, SRS began fabrication in August 2017 while True North, which had already developed a strong relationship with the municipal government, took charge of the permit application process. All of the production work, including welding, computer numerical control (CNC) routing of panels and painting with Cloverdale finishes, was handled in-house, stretching into early September.

“Given its iconic nature, this project was close to everyone’s hearts in our shop,” says Amy.

Once the 2.3 x 9.7-m (7.6 x 31.9-ft) sign was completed, it was transported to the site for installation. “It was a big project,” says Amy. “We had three crews on-site to handle demolitions by night and installation by day. We had done work downtown before, but nothing with this kind of high profile. The Burt is like Toronto’s Massey Hall in terms of great, old Canadian theatres for musicians.”

He credits the opportunity to work directly with True North’s designer and architect for how smoothly the project went, with a solid design and plan.

“That increases your chance of success immeasurably,” he says. “Even Burton Cummings himself really likes the new sign!”