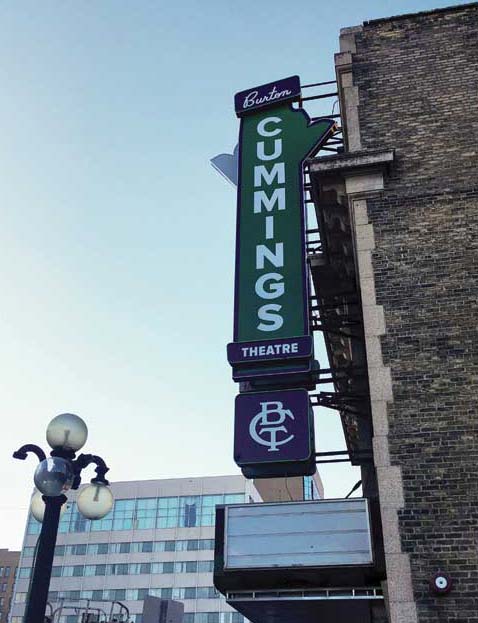 After True North Sports and Entertainment acquired Winnipeg’s Burton Cummings Theatre, it commissioned a new marquee sign, both to modernize the venue and to pay homage to the history of what is affectionately referred to as ‘the Burt.’ The changeover meant a chance to benefit from modern materials, including lightweight acrylic and aluminum, and light-emitting diode (LED) illumination.

A theatre by many names

The venue at 364 Smith Street currently known as the Burt was originally built in 1906 and 1907 as the Walker Theatre. Designed by Montreal architect Howard C. Stone and named after its owner, Corliss Powers Walker, it was part of the larger Red River Valley Theatre Circuit and presented vaudeville acts, ballets, operas and Broadway-style stage shows. It was also intended to be part of a planned hotel, office and retail complex, but that project never came to fruition. The theatre eventually closed in 1933, during the Great Depression.

In 1945, the Walker Theatre was converted into the Odeon Cinema. It went on to serve as Winnipeg’s most popular single-screen movie theatre for the following 45 years.

A non-profit organization, the Walker Theatre Performing Arts Group (WTPAG), purchased the theatre in 1990. With its original architectural features restored (many of which had been covered up when it was a movie theatre), it reopened as a live performance venue in 1991 and was designated a provincial heritage site and a national historic site.

Next, the theatre was renamed in 2002 after Winnipeg-born musician Burton Cummings, the former frontman of rock band The Guess Who, known for such hits as ‘American Woman,’ ‘New Mother Nature’ and ‘No Time.’ The WTPAG had struggled with fundraising, so Cummings agreed to help out with a series of five concerts. Two of these benefit events ended up raising $120,000 to help pay down the organization’s debt.

True North, locally well-known as the owner of the National Hockey League’s (NHL’s) Winnipeg Jets and their arena, Bell MTS Place, began managing and operating the Burt in 2014, purchased it in 2016, dissolved the WTPAG and invested in upgraded electrical systems and plumbing, as part of long-term efforts to rejuvenate and refurbish the venue.

Finally, in 2017, True North signed a continued sponsorship deal with Cummings, ensuring his name would remain on the building through 2032. Cummings, who lives in Los Angeles, Calif., committed to returning to Winnipeg to perform more benefit concerts, the proceeds of which would go toward a new marquee, among other improvements.