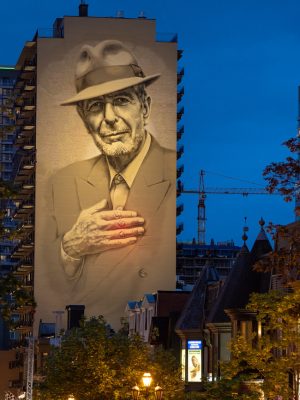 The piece, completed by artists El Mac and Gene Pendon in 2017, was updated due to public demand, which resulted in the non-profit securing lighting with support from the Ville-Marie borough and Tourisme Montreal.

The 21-storey portrait of Leonard Cohen is the city’s largest mural and has become a signature landmark. It has become internationally renowned and has affirmed the city’s standing in the urban art scene. Tourisme Montreal acknowledged the artwork’s major impact by presenting MU, a non-profit mural art organisation, with an ‘Innovation Award,’ (for companies with less than 50 employees) during the Distinction Awards ceremony in March.

“Our administration is pleased to contribute to illuminating this mural commemorating the great Montreal poet whose work has brightened millions of lives all over the world,” said Montreal’s Mayor Valerie Plante. “From now on, the memory of Leonard Cohen will shine in both the literal and figurative sense.”

This project is part of MU’s ‘Montreal’s Great Artists’ collection, which pays tribute to the creative minds and forces who have made outstanding contributions to the city’s cultural scene.