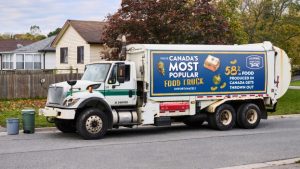 The City of Peterborough is partnering up with Hellmann’s Canada to launch an out-of-home (OOH) campaign and turning half of the city’s waste collection vehicles into mobile advertisements.

On average, 58 per cent of the food produced in Canada ends up being thrown away. The trucks carry a creative message from Hellmann’s suggesting these trucks are Canada’s most popular food truck, as it carries the food that is thrown away by Canadian households to landfills.

The campaign is going to market led by an app called ‘Fridge Night,’ which will encourage people to use up their items in the fridge on a set ‘use-up’ day. The app will offer a solution to help people be more resourceful with food, reduce costs, and waste. The ‘Fridge Night’ app will be promoted by influencers and social support from Hellmann’s channels.

The campaign is rooted in the results of a consumer behaviour study on household food waste conducted by Hellmann’s and Toronto-based behavioural scientists BEworks. The study found that Canadians can reduce household food waste by a third with just one ‘use up day’ a week, according to the news report on Media in Canada.

As of right now, there are no plans to extend the OOH campaign beyond Peterborough, but Hellman’s goal is to drive awareness to Canadians on a national scale on how to save food and cash.