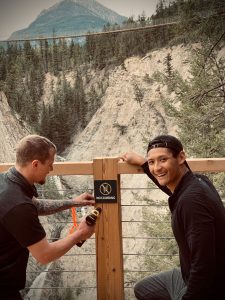 During the COVID-19 pandemic, many people searched for ways to stay active. Getting outdoors and venturing to parks and attractions was, and is, a popular choice for many.

The Golden Skybridge in Golden, B.C., Canada’s highest suspension bridge, opened in May 2021. Perched 130 m (426 ft) above an expansive canyon and engulfed by the Columbia Valley, the epic views from Golden’s newest must-visit attraction will take any visitor’s breath away.

The Golden Skybridge rewards its visitors with views of Rocky and Purcell Mountain ranges, while a crashing river and 61-m (200-ft) waterfall thunders below.

The bridges, sitting 130 m and 80 m (262 ft) high, respectively, offer up dramatic 360-degree views of expansive alpine vistas, while showcasing a roaring 61-m waterfall and serene mountain river in the deep canyon below.

“At Pursuit, we are focused on connecting guests to iconic places through unforgettable and inspiring experiences,” said David Barry, president of Pursuit, an attractions and hospitality company. “The Columbia Valley is one of those remarkable places that is uniquely positioned to provide a stunning, yet, accessible mountain experience.”

The Golden Skybridge features a 3-km (1.9-mile) nature walk weaving throughout the park and across both suspension bridges. Viewing platforms provide guests with further opportunities to take in the picturesque landscapes. An outdoor courtyard and café at the experience base provide the perfect pre- and post-stop rest along the mountain journey.

According to Kelso Brennan, general manager of Banff Signs, the company that designed, fabricated, and installed the signage for the Golden Skybridge, not only is signage the storefront of a business or landmark, it plays a large role in the safety of workers and visitors.

You May Also Like   Gilman Brothers video celebrates 122-year history

“For the types of tourism signs that we’re making for this company, it really is about matching the level of prestige with that of the property we’re adding the signs to,” said Brennan. “We’re trying to elevate the experience for all of the guests, who typically don’t notice signage as it’s meant to blend in. However, if you can have some beautiful signage at the location, I do believe it adds to the overall effect of the experience of the guests.” 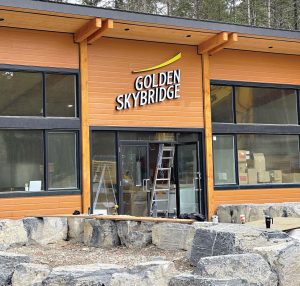 The Golden Skybridge opened in Golden, B.C., in spring 2021.

Banff Signs partnered with Pursuit in early 2020 for design, fabrication, and installation of the approximately 270 signs, including branding, safety, and wayfinding signage throughout the park.

Brennan said getting on-site at the onset of the project was a challenge as the park was not yet completed at the time.

“We had to actually cross the bridge without any sway cables on it the first time we went in for our site visit. So, before we actually designed anything, we had to get into the space to see what we were working with,” he explained. “When we scouted the property, even before identifying what materials we were going to use or what types of signage was needed, we had to fully understand the client’s needs.

They used a running app with GPS to map the entire trail system by recording it on a smartphone. From there, they were able to map and identify the major locations within the park, such as the concession stand, the bungee swing, tree-top park, playground area, and dwelling space.

It was important to use bold colours, as well as natural features within the signage. The signage also had to be durable and last for several years outside in the extreme weather.

“We had to make sure that the same system was going to be changeable in the future so that we could add additions to the wayfinding system as the park continues to develop,” adds Brennan.

A combination of wood and some metal blades were used for majority of the project. The signs are made mostly from western red cedar, a kiln-dried wood that can withstand the outdoor elements for several years.

“All the wood we get come in 2- x 4-ft pieces. We then laminate, plane, and sand them, and from there they go through the coding process. They quite literally start as boards and end up as a finished, unique shape,” he explained. 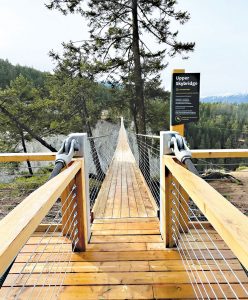 Entrance to the upper skybridge.

“We were really excited to do this project because it was outdoors, so for us it was a welcomed project” explained Brenna, noting this was done right in the middle of the pandemic, and the timeline was tight. Brennan and his team had about three months to complete the project.

“Due to COVID, there was a big race for finding outdoor attractions and things for people to do outside.”

The installation process also proved to be a challenge, especially while crossing the suspension bridge to install the signposts and sign blades.

“Everything had to be done by hand as it wasn’t accessible on the other side of the mountain by vehicle, so we had to bring all our equipment across the suspension bridge,” said Brennan.

Typically, he is not involved in the installation. However, “I wanted to go see this one for myself and experience whatever installers are experiencing firsthand. It’s a pretty extraordinary experience to be out there on those bridges.”

One of Brennan’s favourite parts of the project was what he called an ‘Instagrammable’ moment photo.

There is a bench that overlooks the mountain and there’s a drop-off at the backside. The sign above it says, “Touch the sky.” The sign is laminated with letters that are suspended on an aircraft cable.

“So when someone sits on the bench to take a picture, it’s sort of like an infinity photo and it looks like they’re standing at the edge of the mountain. It’s really beautiful scenery.”

You May Also Like   SMC Readers’ Choice awards 2021 winners announced

Brennan had to install this one himself. He had three stories of scaffolding that was set up to reach it right at the edge of the mountain.

“That was definitely an experience for us to have our harnesses on. I’ve done high-rise work and I’ve done boom truck work at 24 m (80 ft) high, but standing on the edge of the mountain and mounting the signage and letters is a whole different experience,” he said. “It was definitely a breathtaking view.” 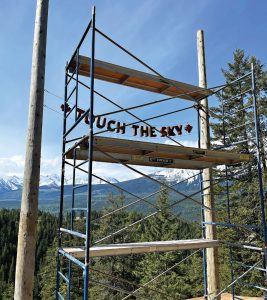 This lookout point is a popular one among visitors for photo opportunities.

Brennan says while phase one of the project is complete, new attractions are being added to the park and they are currently working on phase two.

“The rollercoaster and bungee swing are the big things being built right now,” he said.

A job like this does not come around every day, says Brennan, adding it is why he is proud to be part of such an exciting industry. Sure there are your everyday kind of jobs, but ones like this truly take your breath away.