Branded Cities brings film to life for Luminato in Toronto 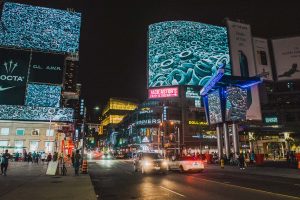 Branded Cities has partnered with Luminato Festival Toronto in showcasing Encountering Edward Burtynsky’s In The Wake of Progress, a film by Bokeh Creative at Yonge and Dundas. Photo courtesy Branded Cities

Branded Cities, a premier Out-of-Home media company, has partnered with Luminato Festival Toronto in showcasing Encountering Edward Burtynsky’s In The Wake of Progress, a film by Bokeh Creative.

“We are honoured to be a part of bringing Edward Burtynsky’s In The Wake of Progress to life on Canada’s largest full-motion digital spectaculars at Yonge and Dundas,” said Steve Elman, chairman and CEO of Branded Cities Canada. “It felt like a natural fit to partner with Luminato in showcasing this masterpiece to all of Canada.”

Branded Cities’ collection of almost 2230 sq m (24,000 sq ft) of digital space used in the film, is the largest domination of digital assets available for ad space in Canada.

“Luminato was thrilled to work with Branded Cities to present art and creativity on a grand scale,” said Jessica Litwin, chief development officer at Luminato. “Through our partnership, we created an unprecedented immersive experience at Yonge-Dundas that brough Edward Burtynsky’s powerful images into the accessible realm of outdoor public art. We are thankful for this opportunity to share art with our communities and look forward to future collaborations.”