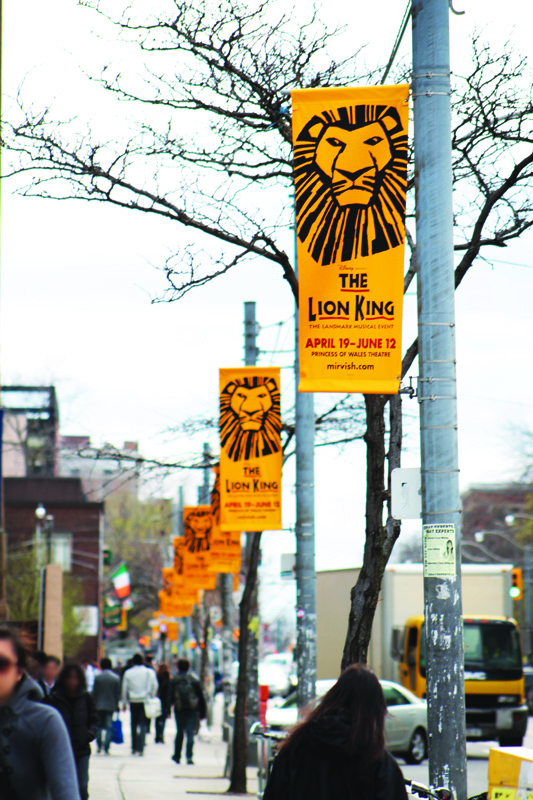 By Peter Saunders
Cityscape Displays, based in Mississauga, Ont., fills a very specific niche in the sign and graphics market by planning, printing, installing and maintaining street banner programs across Toronto to promote events and festivals. To ensure this specialized graphic output can stand up to urban wear and tear, the company relies on high-grade coated textiles.

Bringing printing in-house
The company operated as Carol’s Flag & Banner in Milton, Ont., for about 20 years before it was taken over by its current owners in 2008.

“We purchased the company from a retiring couple,” explains David Dich, one of the three partners. “Much of the value was in the goodwill they had built with the city of Toronto. The street banners represented 95 per cent of the business and they had landed top clients like the Royal Ontario Museum (ROM).”

At that point, the company fabricated its own hardware, acquired the necessary permits and installed the banners, but outsourced the printing. The new owners, who had a shared background in sign design and production—including stints with WSI Sign Systems in Bolton, Ont., and a FastSigns International franchise in Burlington, Ont.—began to change that by bringing printing in-house. This enabled them to expand the business with larger wall banners, but also required more space. After one year in the original 93-m2 (1,000-sf) Milton facility, they moved into a 344-m2 (3,700-sf) plant in Mississauga.

“We knew our new facility would be large enough to accommodate our future needs,” says Dich. “As we expanded, for example,  we were able to add a second floor to it.”

Event horizons
The client list grew as Cityscape promoted its full package of services, from permits through printing through installation, which was rare in an industry where most suppliers were more heavily specialized on just one type of work each.

“Mirvish Theatre Productions was the first organization to really jump on-board with us and expand their street banner promotions,” says Dich. “They found they got a lot of calls for tickets from people who had seen their banners, so now they do ‘takeovers’ along King Street. The National Ballet of Canada has also followed suit.”

Toronto’s bylaws require the street banners—which are not regulated the same way as other out-of-home (OOH) ads—to showcase only events and non-profit organizations.

“The rules are pretty cut-and-dry, so we do a lot of repeat work for the same clients,” says Dich. “We do well with plays, ballets, jazz festivals and ROM exhibits.”

One exception is a site-specific program on the University of Toronto’s (U of T’s) St. George campus, where banners announce graduations and reunions and showcase services for  international students.