By Peter Saunders
Over the past few years, Eminent Custom Graphics of Barrie, Ont.—also known as InkYourRide.com—has upgraded the graphics on Toronto-based Steam Whistle Brewing’s vintage vehicles. Previously painted with a bright green and white colour palette, the fleet now uses digitally printed and laminated films instead. And the results have proven so successful, Steam Whistle has also commissioned Eminent to wrap other promotional items, including portable coolers and a ping pong table.

The vintage look
Steam Whistle was conceived in 1998 by Greg Taylor, Cam Heaps and Greg Cromwell, who had previously worked together for Upper Canada Brewing, before it was bought and shut down by Sleeman Breweries. After attracting investors to their new business plan, the ‘three fired guys’ set up shop in downtown Toronto’s historic John Street Roundhouse, which was a repair and servicing facility for Canadian Pacific (CP) Rail’s steam locomotives from 1929 to 1988.

In addition to the vintage facility, the brewery put together an eclectic fleet of vintage vehicles, ranging from a 1949 International Stake Truck (nicknamed ‘Lumpy’) to a 1973 Dodge Tradesman (dubbed the ‘Steam Weaver’), both for the practical purpose of delivering the company’s pilsner beer to bars and pubs and for the promotional purpose of appearing at community events. 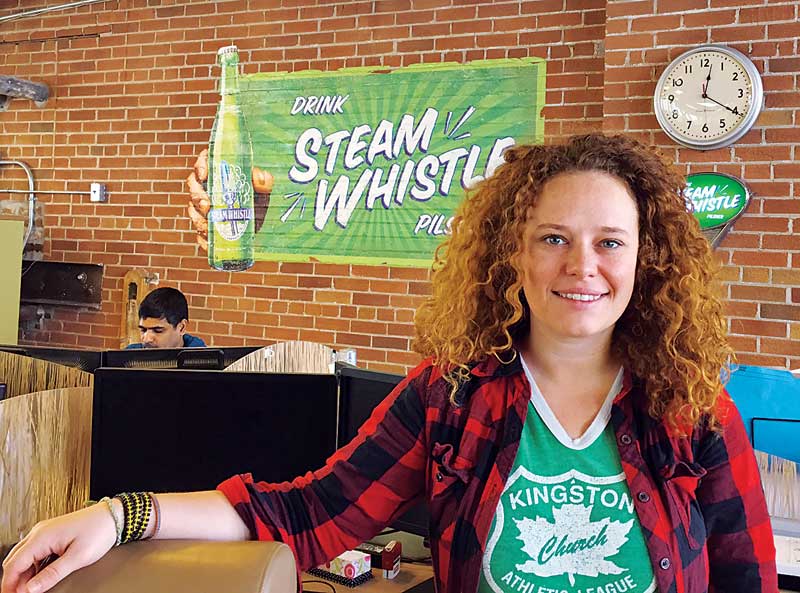 “We have always been focused on one beer and one message, but we have expanded our fleet over time,” explains Nicole George, the brewery’s creative director, who works with designers, marketers and salespeople and oversees visual branding from small to large formats. “We realized ‘retro’ means different things to different generations, so rather than just be known for one era, we have a range of trucks, cars and delivery vans representing each decade from the ’40s to the ’70s, restored in classic detail but also ‘pimped out’ with hot-rod styling. Each vehicle has its own personality, allowing us to celebrate what is best from each decade, with their traditional style, quality craftsmanship and unique designs.”

You May Also Like  Graphic Wraps: Best practices for installations

To connect all of these disparate vehicles in a clearly branded way, Steam Whistle had them painted green, with blue and white detailing.

“We like to keep them simple and clean, so the beauty of the vintage vehicle gets centre stage,” says George. “They are true workhorses, driven daily by our salespeople, delivering beer, functioning as moving billboards because they attract so much attention and even doubling as trade show booths. A number of them are equipped with working draft beer taps!”

In the summer months, several of the vehicles are stationed in regional markets to serve as physical icons for the brewery, given local customers cannot necessarily visit the roundhouse in Toronto.

“Twice a year, we organize a full parade of all of the vehicles, when they come in and out of winter storage,” says George. “It’s pretty fun to see heads turn when we dominate a lane on Ontario’s Highway 401 or a street in downtown Toronto.”