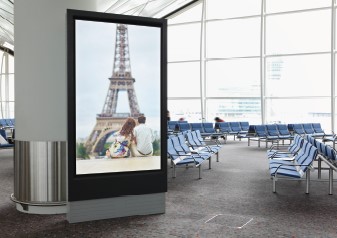 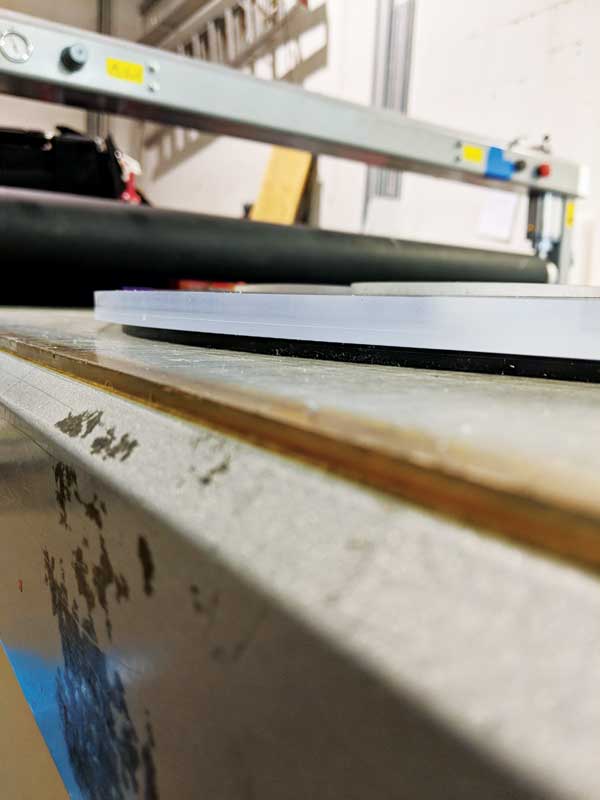 The mosaic images were mounted to the back side of the tempered glass using a flatbed applicator.

Production
After getting the artist and client to approve his concept, which featured a monotone mosaic of the provided photos in the background and a CNC-routed acrylic reproduction of Craig’s painted artwork as the front surface, the next task was colour selection.

The concept’s colour palette leaned heavily on shades of brown. There were not enough vinyl options in circulation to support all of the necessary hues. Another option would be paint, but instead, Metituk created a wider range of colours by layering vinyl on the face and back of the clear acrylic. When light penetrates the acrylic, it changes the appearance of the colour. Also, many vinyl films show a different shade when they are reversed. The key to making the image really stand out, however, was adding leather-textured wrap material to certain parts of the bear, where it visually made sense.

The process of deciding upon the colours and then determining how to create them through layering and how to construct the bear took about two to three days.

The background was constructed with 8-mm (0.3-in.) thick tempered glass, which was custom-cut to hold the standoffs. The choice of standoffs and anchors was also very important, as they would need to (a) support a significant amount of weight, given the two panels would weigh 54 kg (120 lb) each, and (b) prevent vandals from removing the piece from the wall. As such, in comparison to most gallery art, the installation hardware had to be ‘overdesigned.’ The combination of sign standoffs and high-performance anchors (the same type widely used for hanging large TV screens in home theatre systems) could support approximately 113 kg (250 lb). Also, Metituk modified the standoffs by adding 51-mm (2-in.) spacers made of 6-mm (0.2-in.) thick black acrylic, to distribute the weight over a larger surface area than just the holes.

After importing all of the provided photos for the mosaic and filtering them with a light blue/grey colour, which had test-printed properly, Metituk aligned and trimmed the images to fit in horizontal rows. Overall, almost 600 photos were used. 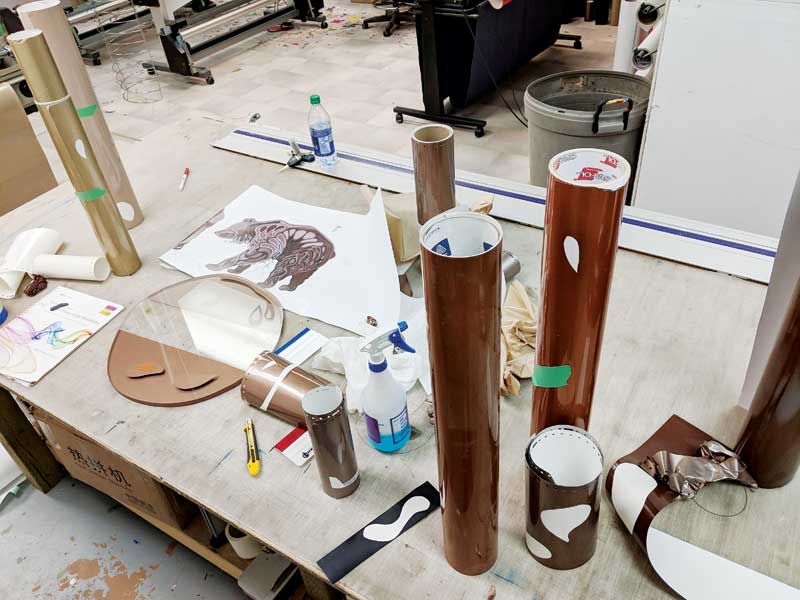 Dave Metituk handled the project at his Speedpro Signs shop.

Next, the images were reverse-printed onto ‘etched glass’ vinyl using one of the eco-solvent presses, laminated with white vinyl and mounted to the back side of the tempered glass using the flatbed applicator. The vinyl installation was completed within an hour, with no contamination of the prints and no reprinting needed.

The image of the bear, meanwhile, started out with more than 200 pieces of vector art provided by Craig. Metituk managed to combine these and reduce the number to 134 pieces with no visible differences. The process required attention to the most minute of details, particularly during welding and drilling.

Further, the bear was not simply a flat image when fully assembled. Some of the acrylic components, such as the front shoulder, were thicker than the rest, while others, like the rear foot, were thinner. In this way, the image became more dimensional than it could have been as traditional painting.

Another challenge was figuring out how the configure the layers. The vinyl on the back side of the clear acrylic offered an opportunity for light to play a role in highlighting parts of the bear. By way of example, the bear’s eye was routed halfway through 12-mm (0.5-in.) thick acrylic and painted on the back side, giving it a surreal ‘floating’ effect.

The bear required a variety of thicknesses of acrylic, ranging from 1.5 to 12 mm (0.06 to 0.5 in.). Most of the material was clear, as mentioned, but some portions provided a layer of black as desired to affect the layout, play with the colour tones of some of the vinyl and enhance the effect of viewing the piece from the side.

Ultimately, the 134 pieces of the bear image had to be layered on top of and inside each other. By the end of the project, Metituk could take them apart and put them together just like the pieces of a favourite jigsaw puzzle.

Throughout the process, he took pictures and videos and added them to a shared folder, to which Craig also had access. This way, the artist could see the progress of the piece and provide his feedback along the way. Craig expressed his satisfaction with the attention to detail that was going into the project and said he enjoyed watching it all come together.