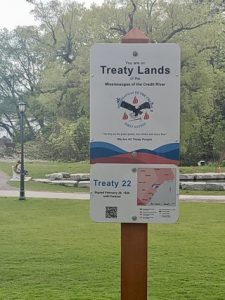 The town of Oakville, Ont., and the Mississaugas of the Credit First Nation (MCFN) have launched a project to situate land-based placemaking signage throughout the community.

According to a report from oakvillenews.org, more than $20,000 was provided to the town for the fabrication and placement of 20 permanent Treaty Lands signs in high-traffic areas, as part of Debwewin: The Oakville Truth Project.

Designed by Indigenous digital media company Jensen Group, the signs indicate community members are on Treaty Lands and feature a map of others in the area. They also include an acknowledgement of the land and a QR code linking users to the project’s website.

A land survey was conducted earlier this year to determine the exact locations of the treaties. In April, MCFN Elder Peter Schuler went on a blood memory walk of the Treaty Lands to determine the placement of the signage. The town committed to having the signs installed for National Indigenous Peoples Month in June.

Plaques of the treaty signage are available for organizations and businesses and include a land acknowledgement approved by MCFN.