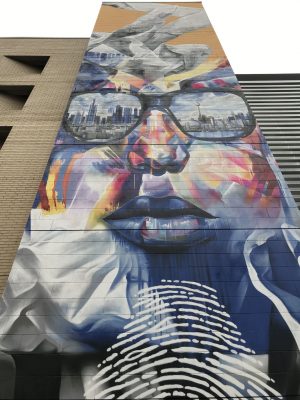 A new mural was unveiled in Toronto as part of the Start 2019 Mural Exchange project.

A new mural was unveiled in Toronto as part of the Start 2019 Mural Exchange project.

The installation located at Charles and Yonge Street, celebrates the long-time relationship Toronto and Frankfurt, Germany have shared as sister cities for 30 years. The piece was conceptualized and painted in six days by Justus Becker, who is from Frankfurt, with support from local artists Alexander Bacon, Quentin Rockford, Christina Mazzulla, and Kyla Buium.

The landscape of each city appears in the reflection of the glasses on the mural. The wall where the piece is painted is part of a Green P parking garage, provided by the Toronto Parking Authority.

“Public art brings people together and breaks down barriers,” said Thompson. “This new mural by Becker binds together Frankfurt and Toronto from across an ocean and reinforces how international perspectives can strengthen our local communities.”