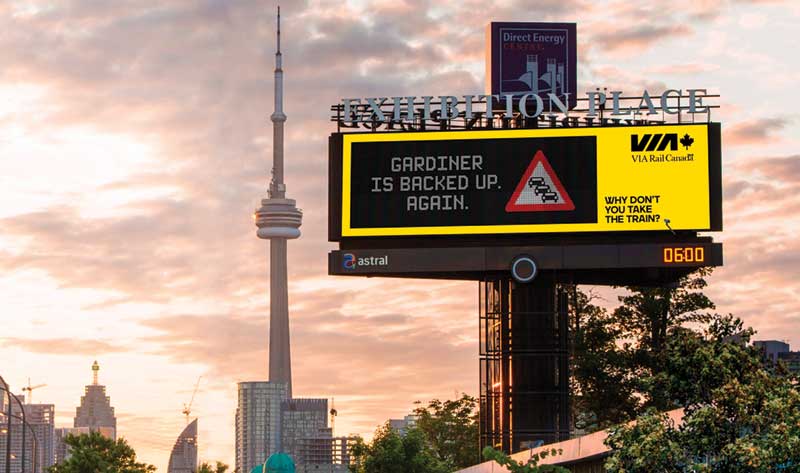 By Rosanne Caron
In 2016, online media accounted for 47 per cent of all Canadian advertising revenues. Most other paid media have experienced a decline in their ad revenues due to the overall shift toward online spending. One notable exception, however, is out-of-home (OOH) advertising, which has continued to experience at least modest growth year-over-year.

Consultations with industry stakeholders, including advertisers, agencies and OOH network operators, suggest there are two key barriers preventing OOH from significantly increasing its share of total ad revenue. Both of these barriers will need to be addressed.

First, the OOH industry needs to be able to provide both quantitative and qualitative information about its audience. The current numbers being reported are not enough. Agencies and advertisers need further ‘proof’ of and actionable insight into the particular consumer demographics being delivered to them, along with the associated lifestyles
and behaviours, if they are to justify greater expenditures on OOH ads. Granular data at the location-specific level will provide this assurance, showing how advertisers’ messages are reaching the desired audience at the right place and time.

Secondly, the planning and buying process for OOH campaigns needs to be made easier and more efficient, so the medium as a whole becomes more attractive to advertisers. If OOH is instead seen as a ‘resource hog’ that takes more time than other media to plan, then this will negatively affect the industry’s efforts to increase its share of ad revenue.

The Canadian OOH Measurement Bureau (COMB), which publishes OOH market data, has been working closely with its member companies to address these barriers. Fortunately, there have been some exciting developments and there are new changes on the horizon.

Celebrating great campaigns
Given the rise of online advertising, it may seem ironic how a campaign for Twitter, a social media platform, was the Grand Prix winner at the 2017 Cannes Lions International Festival of Creativity in the outdoor advertising category. Twitter’s use of simple and engaging OOH content, featuring its logo and hashtags alongside images from the news and pop culture, highlighted its ability to provide a forum for political debate and discussion of issues ranging from guns to marijuana.

It is interesting to note the similarities between Twitter and OOH media. The social media platform restricts the length of messages, forcing it users’ ‘tweets’ to be succinct and focused, rather than allowing a long, drawn-out dialogue. Creating an effective message for a billboard that is only seen for a few seconds also requires a certain singlemindedness, which Twitter understood with its award-winning campaign.

“OOH is a great way to get people to look up,” says Jayanta Jenkins, Twitter’s global creative chief. “You can use less to say more.” 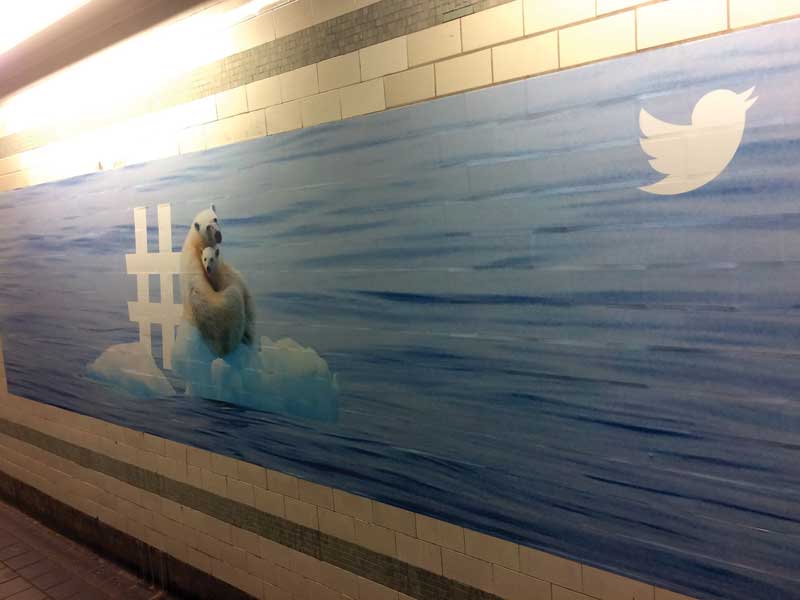 A campaign for Twitter was the Grand Prix winner at the 2017 Cannes Lions International Festival of Creativity in the outdoor advertising category.

You May Also Like   Digital Signage: Seven common pitfalls to avoid

What makes the Iris Awards unique from other programs is the judging of quarterly entrants has been handled by a panel of consumers, based on visual impact and appeal, message comprehension and relevance, which will determine 2017’s grand prize winner. The creative team behind the top campaign will be OMAC’s guests at the Outdoor Advertising Association of America’s (OAAA’s) 2018 Obie Awards event in Austin, Texas. The Obies are among the oldest and most prestigious honours for OOH advertising.

OMAC also helped launch Open3, a new book celebrating creativity in OOH advertising, in the spring and is currently distributing 1,000 copies to marketers and creative agencies across Canada to help showcase the creative potential of OOH campaigns. (It can also be viewed online at www.omaccanada.ca/open3[3].)

To develop Open3, OMAC collaborated with some of its counterparts around the world, including OAAA, the Outdoor Media Association of Australia (OMA), Outsmart UK and the Federation European Publicité Exterieur (FEPE). Together, they compiled more than 150 images of some of the world’s best OOH campaigns, including 16 projects from Canada, along with essays contributed by industry leaders, including Zak Mroueh, founder, CEO and chief creative officer of Toronto-based agency Zulu Alpha Kilo.

“OOH is one of the oldest forms of media, yet few know how to capitalize on its attention-getting power,” says Mroueh. “Open3 will hopefully inspire the next generation of creative OOH thinkers.”

“There’s never been a better time to be creative, to be a game-changer and to reinvent the OOH industry,” adds Philippe Meunier, co-founder and chief creative officer of Sid Lee.

OMAC’s own library includes more than 100 case studies from around the world and across various business sectors that demonstrate the value of OOH in effective communications for audiences on the move. Many of the recent examples show how OOH’s role has been redefined, from building scale and reach to inspiring mobile searches and purchases, among other activities. The searchable library can be found at www.omaccanada.ca/case-studies[4]. 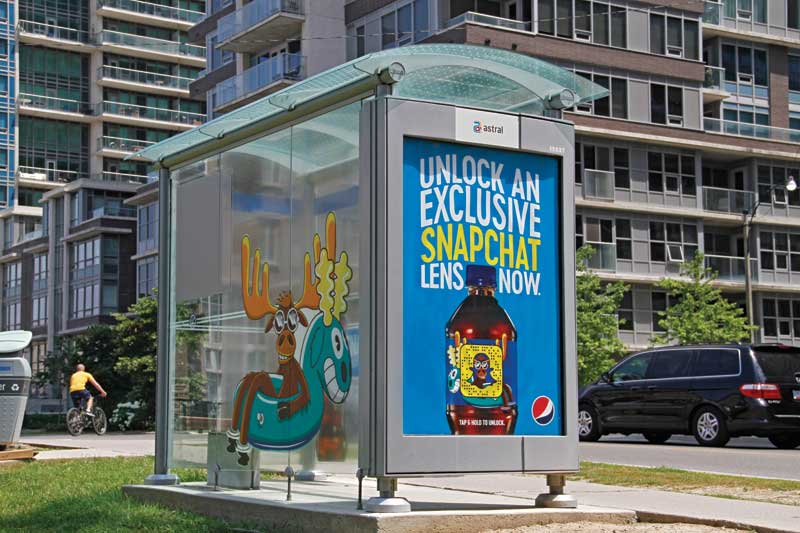 Pepsi Canada partnered with Snapchat on transit shelter ads that encouraged commuters to scan codes with their mobile devices.

Viewing OOH positively
In an era of unprecedented disruption of media, OOH continues to be viewed positively across generations. This is important because consumers’ receptivity to a given form of advertising has a direct effect on the level of attention they pay to it and whether or not they are inspired to take related action afterwards, e.g. buying the advertised product.

Studies have shown people are generally more positive toward traditional advertising and more skeptical about digital forms of advertising. In 2016, for example, advertising market research firm Kantar Millward Brown conducted a global study that showed even consumers born after 1995, who have grown up in an age of high-tech communications and with prolific use of social media, have a more positive attitude toward outdoor ads than they do toward other, newer, digital media.

This does not mean there is no place for newer technology, of course. Through a recent partnership between Pepsi Canada and Snapchat, for example, transit shelter posters and wall murals displayed a Pepsi bottle with a Snapcode for consumers to scan with their mobile devices to unlock exclusive ‘lenses’ for fun, interactive photographic applications. The concept was a hit.

Creating contextual relevance
When an OOH ad clearly relates to the environment around it, consumers are more likely to notice it and feel it is speaking to them. Digital screens, especially, can increase the contextual relevance of OOH through alignment of content with the mindset and lifestyle of passersby.

A recent Via Rail campaign, for example, displayed messages on digital billboards that were based on the latest traffic conditions and informed drivers about how long it would take them to reach specific destinations in their personal vehicles compared to taking a train.

Similarly, when the music streaming service Spotify entered the Canadian market in 2015, the company tapped into its own real-time data to identify more than 30 neighbourhoods and develop playlists for them, based on what people in those neighbourhoods are listening to, when and how often. Customized billboards and transit ads then promoted each playlist within its corresponding neighbourhood.

The campaign was a huge success, with daily registrations for Spotify increasing by 21 per cent. The company jumped from number three to number one in the rankings of app store downloads. Most significantly, Canada’s overall streaming on Spotify increased by 71 per cent over the previous period. The campaign went on to win a silver trophy at the Cassies, Canada’s premier advertising award program, in 2017. 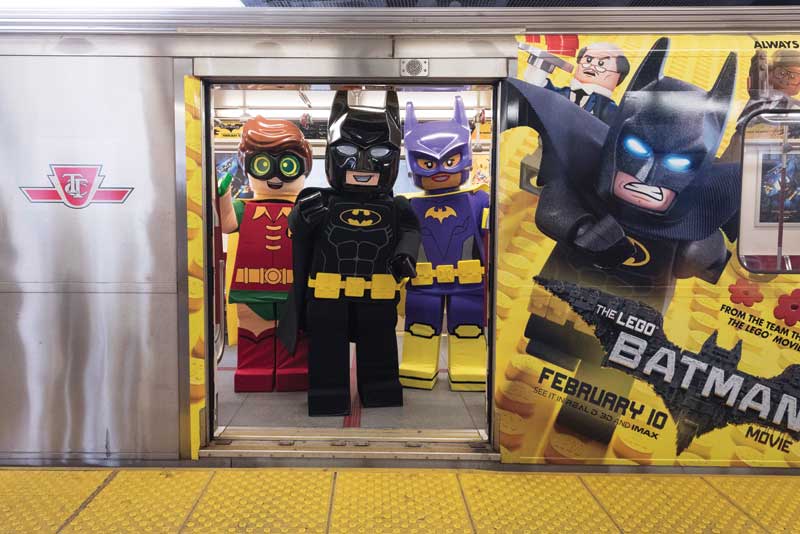 From exposure to purchase
OOH not only increases brand awareness, but also motivates consumer behaviour. There is a strong correlation between people’s exposure to the medium and their subsequent purchases of the featured products.

You May Also Like   Digital Signage: Linking communications from software to hardware

According to a 2016 TouchPoints study—and mirroring the findings of an earlier one—nearly two-thirds of all purchases by consumers are made within the same half-hour as their exposure to OOH, including:

Driving online activity
Consumers born since the 1980s, i.e. so-called ‘millennials,’ are the most likely to search the web or apps while commuting, at 59 per cent, but even the least likely demographic, late baby boomers, is significant with an incidence rate of 45 per cent. OOH is in a unique position to shape this growing online activity.

A recent campaign for Ovarian Cancer Canada, a charity, showed how OOH can serve as a link with the online world. The bold ads, which used the term ‘ladyballs’ to evoke an emotional response and spark discussion of the disease, resulted in a 118 per cent year-over-year increase in inquiries from women about ovarian cancer, an average increase of 22 calls from donors per week and a 220 per cent increase in social engagement, with 75 per cent of donations received during the campaign coming from new donors. (The work also went on to win a 2017 Cassies award.)

Giving back
The Ovarian Cancer Canada campaign is also an example of how the OOH industry is committed to giving back to the community. In 2016, for example, OMAC member companies—including Astral Out-of-Home, Clear Channel Outdoor Canada (CCOC), since renamed Branded Cities Canada, Lamar Transit Advertising, Outfront Media Canada, Pattison Outdoor and Quebecor Media Out-of-Home—donated more than $24 million worth of advertising space to more than 120 charities and non-profit organizations across the country (more details are available at www.omaccanada.ca/community-support[7]). These campaigns have raised awareness of important causes, boosted fundraising efforts, empowered youth and supported arts and culture.

Rosanne Caron is president of (OMAC) and (COMB) and a member of Sign Media Canada’s editorial advisory board (EAB). For more information, visit www.omaccanada.ca[8] and www.comb.org[9] or contact her via e-mail at rcaron@omac.comb.org[10].