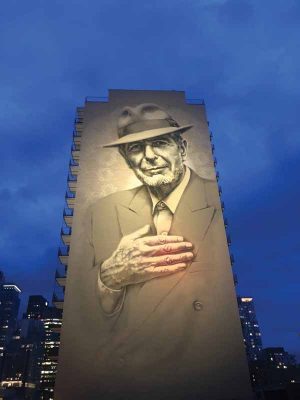 Completed by artists Gene Pendon and El Mac in 2017, Tower of Songs—a 21-storey mural located on Crescent Street in downtown Montreal—commemorates the famous Canadian singer-songwriter Leonard Cohen and has undoubtedly become a signature landmark in the city. The towering image—based on a photo taken by the singer’s daughter, Lorca, in 2008—depicts Cohen, sporting his signature fedora with one hand over his heart.

In response to the large public demand, MU, Ville-Marie borough, and Tourisme Montréal commissioned the urban lighting company Ombrages Group to illuminate the mural as a beacon to celebrate the life and works of the legendary artist within the local urban art scene.

“When your job is to honour the memory of a versatile musician and poet, such as Leonard Cohen, no matter how simple it may look, it is a monumental task,” said Mehdi Laeb, CEO, Ombrages Group.

Three high-output 3000K correlated colour temperature (CCT) light-emitting diode (LED) projectors were strategically installed to uniformly illuminate the 790-m2 (8500-sf) vertical piece. A regular output LED projector lights up Cohen’s hand over his heart with red hues, symbolizing the artist’s passion and love for music. Soft white lights were especially chosen to light up the mural. Not only do they lend warmth to the artwork, but also add an enigmatic charm, urging onlookers to slow down and remember Cohen’s artistry.