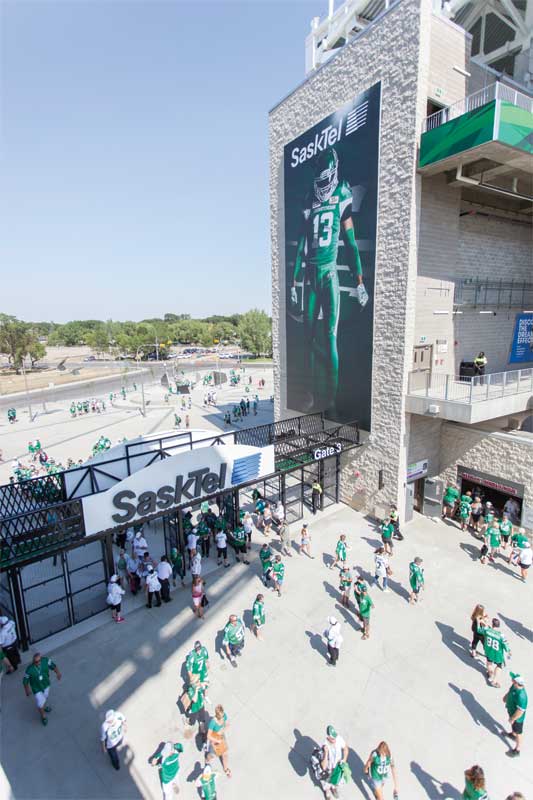 Among 2017’s major strides and crowning achievements for Canadian sports, teams and events was the final completion of Regina’s new Mosaic Stadium. The home of the Canadian Football League’s (CFL’s) Saskatchewan Roughriders, who made their debut there to a sold-out crowd last June with a preseason game against the Winnipeg Blue Bombers, has a 30,000-seat capacity.

The Look Company (TLC), based in Barrie, Ont., oversaw the graphic branding of the facility from concept to completion, including stakeholder consultation, product design, custom signage development, wayfinding and traffic flow planning, production, delivery and installation, in consultation with two clients, the Roughriders and Regina’s municipal government, as they co-own Mosaic Stadium.

An expansive undertaking
The sheer scale of the project—which would cover every surface of the new stadium, from the field of play to football operations to concourses to suites to very important person (VIP) lounges to business offices to a retail store—represented an expansion of TLC’s usual services. Particularly notable were the project’s unique design elements, including fan experience zones with integrated sponsor messaging, a grand staircase surrounded by backlit graphics, permanent wayfinding signage and custom entrance archways.

A team of four project managers, two wayfinding design experts, two research and development (R&D) professionals and three graphic designers dedicated their expertise to ensure the project was completed on time, on budget and to the clients’ brand standards, delivering an exciting home-field experience.

More than 23,226 m2 (250,000 sf) of material were created and installed for permanent and semi-permanent applications. The wide variety of custom structures and graphic display elements included the following:

Indoor wall graphics
The majority of the stadium’s ground-level interior wall graphics were printed on fabrics and installed with silicone edge graphic (SEG) framing. This arrangement allows for rapid graphic updates without requiring any specialized tools. 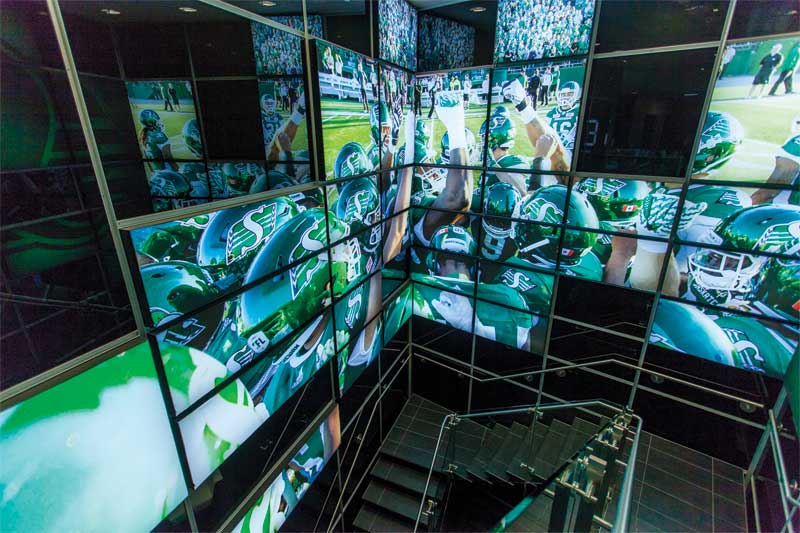 The grand staircase is surrounded by fabric-covered lightboxes.

This feature area showcases a digital dye-sublimation printed fabric background, mounted to a wall in the stadium’s Harvard Lounge with 17-mm (0.67-in.) thick SEG framing, along with 100 different CFL player helmets, which sit on custom mounts that were all fastened to the wall by hand.

Dimensional lettering over printed fabrics
A specialized technique was applied in the stadium’s high-value premium seating and VIP areas. First, the same 17-mm thick SEG frame low-profile extrusions and fabrics were attached to walls and structural columns. Next, pinmounting holes were cut through the fabric by hand. Finally, raised, three-dimensional (3-D) acrylic and brushed aluminum lettering was installed atop the fabric, providing an elegant effect.

TLC’s wayfinding designers created the layout, drawings and final artwork for the lightboxes, which were custom-sized and manufactured from 120-mm (4.7-in.) thick framing, to which SEGs and light-emitting diodes (LEDs) were added. The benefits of this system include very low power consumption and easy graphic changeouts when needed.

Entrance gates
Each of the stadium’s main entrance gates was custom-designed, so as to recognize the corresponding sponsors with partnership signage. Channel letters were married with tension banner hardware for extended façade coverage.

TLC fabricated and installed metal atop the gates to support the backlit channel letters and framing behind vinyl graphics. The framing was specially built to accept LED signage, which will replace the vinyl graphics in the future.

The SaskTel-sponsored gate is more customized and decorative, featuring a specially built metal lattice, and its signage uses backlit letters that show one colour by day and another when lit at night. 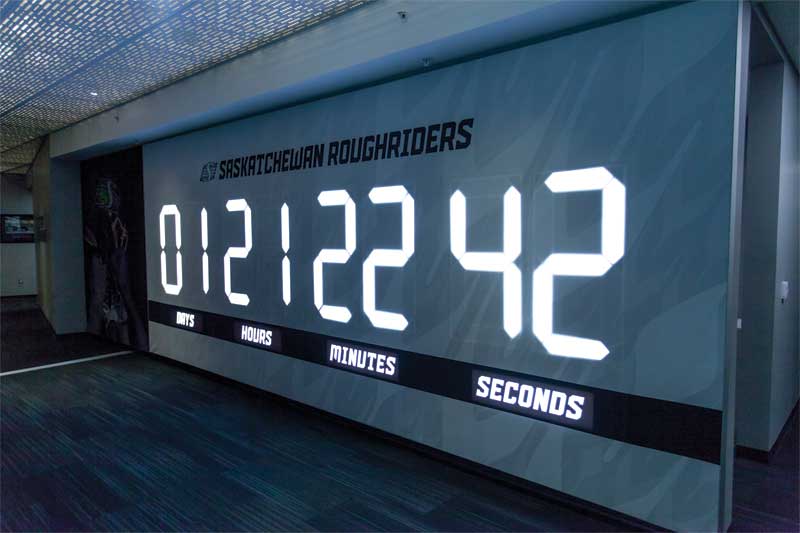 A backlit fabric wall serves as a giant clock, with illuminated numbers synchronized to count down to each game day.

A unique ‘clock’ feature was installed behind a large, backlit fabric wall in the football operations area. An approximately 1.8 x 6-m (6 x 20-ft) set of illuminated numbers, controlled by custom software, is digitally synchronized to display the countdown to each game day. The fabric face was tensioned to an aluminum extrusion frame and prevents any light spillage between the numbers.

You May Also Like  Wide-format Graphics: Digitally printed office decor

The wayfinding designers incorporated branding elements found elsewhere in the stadium to help tie the overall look together. A UV-curing printer output the messaging on an aluminum composite material (ACM), which was then fastened to framing systems. Some accents were produced using polyvinyl chloride (PVC) and then fixed to the ACM surface.

End zone graphic
A standing-room-only area in the stadium’s south end zone, dubbed Pil Country, displays a large-format bleacher graphic, produced with a 369-g (13-oz) banner material and a specialized tension frame and mounted to buildouts to avoid obstacles and junctions, so as to provide a clean, even appearance. ACMs were added between any gaps, both to add strength and to seal the inner framing away from view. Graphic protection was particularly important at the lowest level, where football players have access to jump up for high-fives after touchdowns and fans use the structure to make noise.

Column wraps
To avoid any on-wall obstacles for column wrap graphics, UV-printed ACMs were fastened to a built-out substructure. The ACM edges were routed with a 90-degree bend for a clean, non-sharp look.

Retail graphics
A variety of dye-sublimation fabric graphics and frames were placed throughout the stadium’s retail area. Fixture toppers were installed with 50-mm (2-in.) SEG frames, while backdrops and murals used the aforementioned 17-mm frames. 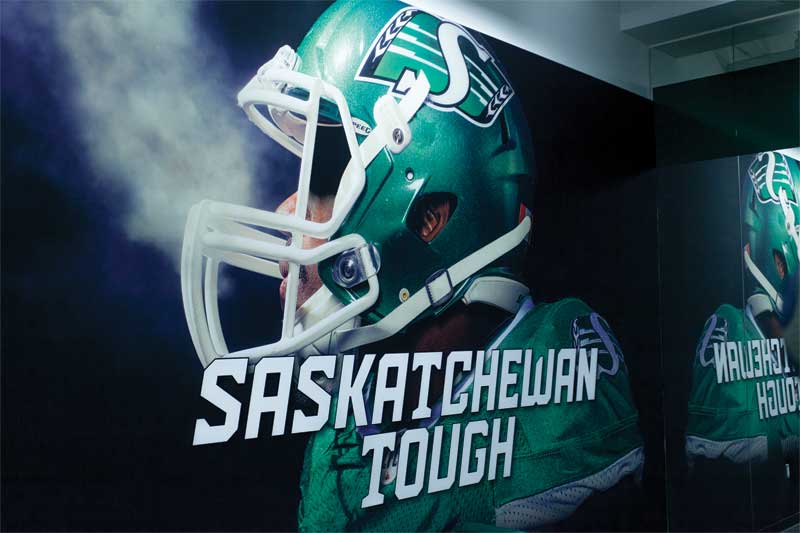 Through all of these various applications and consistent graphics, TLC developed a full environment branding program for Mosaic Stadium, achieving the clients’ objectives of providing an immersive fan experience while seamlessly and tastefully integrating sponsorships and pageantry in every corner of the facility.

“The moment all of our corporate partners stepped into the stadium and saw the final artwork, they all said it was spot on,” says Steve Mazurak, vice-president (VP) of sales and partnerships for the Saskatchewan Roughriders.

You May Also Like  Environmental Graphic Design: Dynamic architecture and interior décor

“The approach and the results are, in a word, outstanding,” says Craig Reynolds, the team’s president and CEO. “It is an absolute pleasure to showcase and proudly tell everyone about the look of our new facility, which was delivered exceptionally.”

Adam Mitchell is marketing manager for The Look Company (TLC). For more information, contact him via e-mail at amitchell@thelookcompany.com.