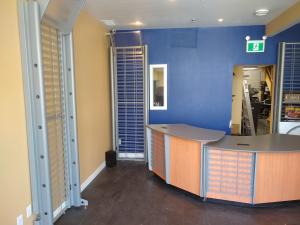 Custom-engineered to match the room’s concave curvature, where it has replaced a 15-year-old system, the new video wall is made up of 2-m (80-in.) LED cubes from Delta Displays, each of which showcases four separate camera feeds, along with status updates for the TTC’s subway lines and other transit networks.