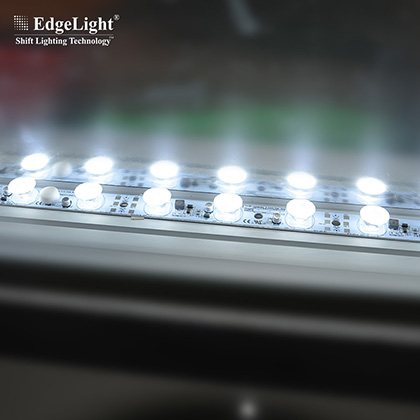 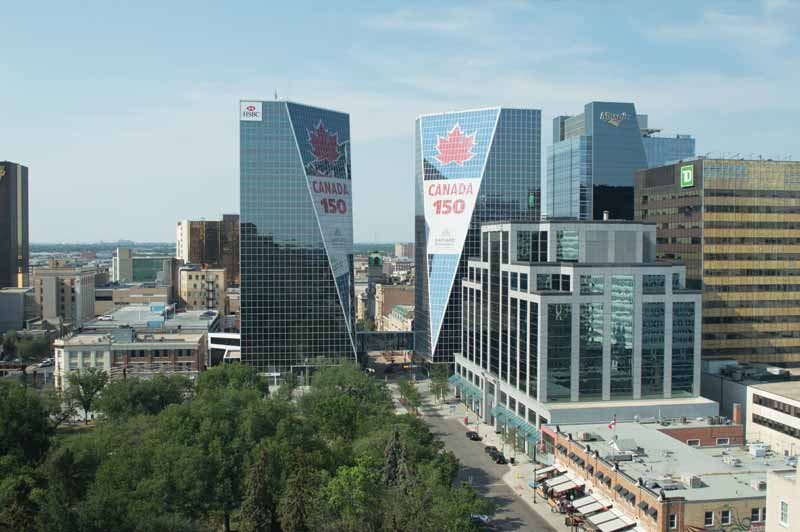 By Carl Weger
For Canada’s recent 150th anniversary of Confederation, Sleek Signs printed graphics on perforated films and installed them on Harvard Developments’ two Hill Centre Towers in downtown Regina. While the company’s slogan is “We print big,” this project was as big as they get, comprising more than 929 m2 (10,000 sf) of graphics—but the biggest challenge would be wrapping them onto the towers’ sloped faces, in a prairie city known for temperamental wind fluctuations, right downtown along Scarth Street, the busiest pedestrian corridor in the city. As such, plenty of planning was needed.

Support for this show of national pride came only from Harvard and its downtown business partners, without financial assistance from any government agencies, but in many ways, it was the highlight of Regina’s Canada 150 celebrations, with the end results showing up in countless photos and social media posts. Given its scale, it was certainly the largest.

While the team at Sleek Signs was proud to work on the project, putting it together was a very challenging task, particularly with timelines for implementation that did not leave any room for error.

Planting the seed
The project’s beginnings were more aspirational than practical when Sleek first approached Harvard to pitch the notion of potentially wrapping the downtown towers at 1874 and 1881 Scarth Street, which are iconic features of the Queen City’s skyline. The team was pleasantly surprised to hear Harvard’s managers had already been considering just such an idea and there might be an opportunity to turn it into reality.

Armed with a few crude corrugated plastic mockups and a ballpark estimate, Sleek planted the seeds of what would eventually become a nationally acclaimed project. 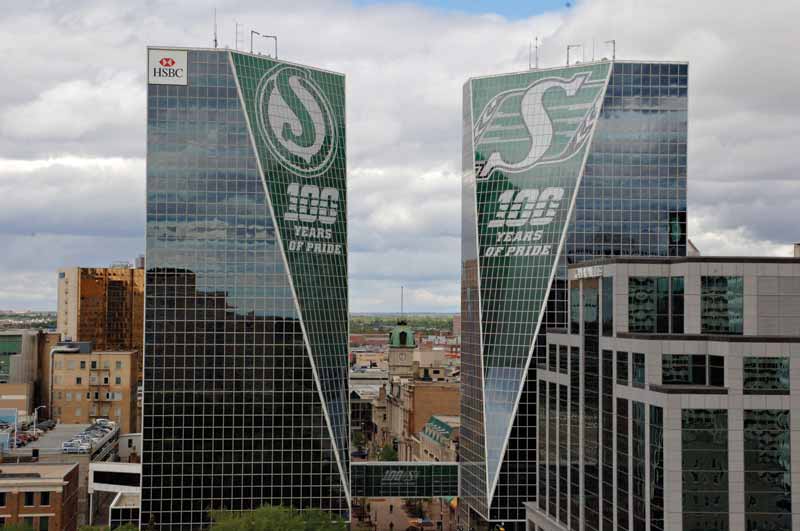 Sleek Signs had previously wrapped the towers for the 100th anniversary of the Saskatchewan Roughriders.

Same but different
Sleek had previously undertaken a similar project in 2010, wrapping both towers for centennial celebrations of the Canadian Football League’s (CFL’s) Saskatchewan Roughriders. That project had earned an outstanding reaction and publicity, but in some ways was fundamentally different, as Sleek worked through the Roughriders’ football club, which handled negotiations with Harvard for the space and also had to work with a third-party advertising agency.

This time around, Sleek worked directly with the buildings’ owners on all aspects of the project, from the planning and design to the installation timeline. In some ways, this made the process much simpler.

The timelines, however, added to the project’s complexity. Sleek approached Harvard in December 2016 and the work would only need to be completed by July, which sounds like a lot of time, but the wheels can end up moving very slowly when getting a project of this size planned and approved. In fact, it was not until the middle of April 2017 that a formal commitment was made by the client.