“We never really advertised ourselves or made cold calls for sales, but word of mouth helped us transition to a larger scale,” Vass explains. “Whenever we came across a new opportunity, we really attached ourselves to it. After an ambulance company approached us for new fleet graphic designs, for example, we ended up making decals for them for about 10 years.”

Vinyl weeding gave way to digital inkjet printing, starting in 2005 with a Gerber Jetster and a Mimaki JV3, enabling Kota to provide full-colour wraps. Retailers began to commission point-of-purchase (POP) displays, along with window and wall graphics. Vass credits the attention to a focus on in-house design.

“We’ve always believed in that,” he says. “Our tagline was ‘revolutionizing the sign industry,’ which we set out to do simply by making signs look nice. Our philosophy has always been that it’s just as easy and takes the same amount of time to make an appealing sign as a boring one. That’s why we’ve always had designers on staff, making it possible for our customers to deal with one shop from start to finish.” 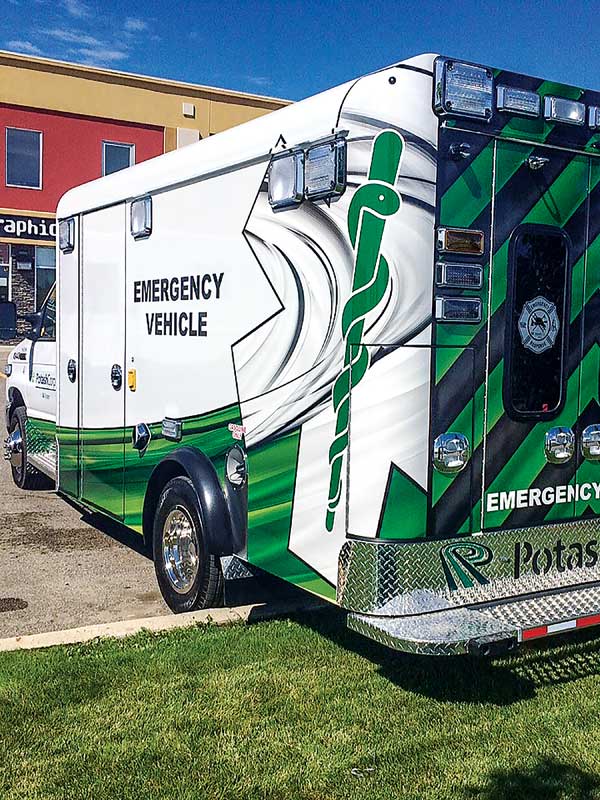 One market where Kota became dominant in its region was in the design and installation of decals for ambulances.

Serving new businesses
The next relocation coincided in 2009 with Saskatoon’s economic boom. Kota became one of the first companies to move into the city’s newly developed north end.

“That year, the city had a less than one per cent vacancy rate for commercial properties,” says Vass. “This is why the north end made sense for us. As new businesses moved in, we got a lot of attention from them, since they all needed signage and fleet graphics.”

You May Also Like  Vehicle Graphics: Opportunities in commercial and personal graphics

At 418 m2 (4,500 sf), the new space not only was larger than the previous one, but also offered a better layout for a staff of nine and an installation bay that can accommodate a 16-m (53-ft) long trailer if needed. Efficiency increased by 35 per cent.

That was an important improvement, as with the vibrant economy, the pressure on sign companies to meet deadlines became much stronger. Rather than become a mass producer of ‘commodity’ graphics, however, Kota took on a broader variety of creative projects, including trade show booths and enormous wall murals, such as a bathroom stall wrapped to resemble the inside of a Ford truck.

To support such undertakings, the production department added more Mimaki printers, along with an HP durable aqueous ‘latex’ printer.

“The latex inks are great for indoor wall graphics,” says Vass. “We used to see our solvent-based graphics pushing themselves off of the walls in certain places, depending on the type of paint that was beneath them. It even happened once with graphics we had allowed to outgas for a full year! The latex graphics stick with zero problems.”

Another, related new endeavour has been expanding into architectural films for projects like door wraps and feature wall upgrades. As Kota has gained experience in this area, it has become one of only a few shops in Western Canada certified to use 3M security films.

“It was a steep learning curve, as these products behave very differently and require advanced techniques for proper application,” says Vass, “but they have proven popular with contractors.”

Given the continued growth of the local economy, Kota’s shop space may be increased again within the next five years, with a focus on expanding into flatbed printing.

“I’ve seen some very impressive printers and can tell where the industry is heading,” says Vass. “The types of projects and creative uses you can offer with a flatbed are very appealing.”