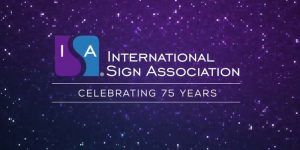 International Sign Association (ISA) is celebrating its 75th anniversary in 2019.

Initially called the National Electric Sign Association (NESA) when it was first formed in 1944, today this group is known as the International Sign Association (ISA) and it is celebrating its 75th anniversary.

NESA began with eight founding objectives, many of which still remain at the core of ISA’s work, including:

“It really is amazing to see how many of these goals remain a significant work of ISA today,” said Lori Anderson, ISA president and CEO. “While our founders would be amazed at how far our industry has come and the ways technology improvements continue to build upon signs’ importance to our customers, their foresight hit upon what would be crucial to driving our industry forward.”

The ISA has built upon these goals to respond to changing needs and opportunities. Today’s workers are trained through a variety of methods, including in-person, webinars, and on-demand online training events. The association also continues to produce research that provides insight into the value of signs, working closely with the Sign Research Foundation.

Other goals have changed and ISA has responded by tailoring programs to address pressing needs. Recruiting and retaining workers is a current challenge. In response to this changing dynamic, the ISA launched two special programs: Sign Manufacturing Day, which promotes the industry to students, and ISA Elite, which brings next-generation industry leaders together.

The ISA will mark this significant anniversary throughout the year; the ISA Sign Expo 2019, which will be held April 24-26 at the Mandalay Bay Convention Center in Las Vegas, Nev., will include a 75-year celebration at ISA Rocks, the industry’s annual party.