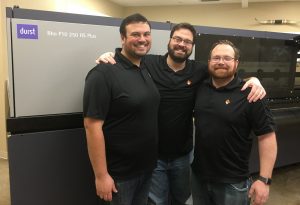 FireSprint has experienced a period of growth and as a result has installed a Durst Rho P10 250 HS Plus printer. Pictured from left to right are owners Gene Hamzhie and Mark Kistler.

The 10 picolitre ultraviolet (UV) printer produces 1000 dots per inch (DPI) resolution and prints on both rigid and roll media.The Rho P10 series is suited for large-format specialists who aim for a consistent quality on a variety of advertising and promotional materials.

FireSprint was going through a period of growth and went on the look out for a printer that would meet their increasing demands while maintaining high-quality output—traits notably missing in their previous printer.

“When we started to investigate Durst, they did not have a showroom in North America which took us back a little,” said FireSprint’s president Gene Hamzhie. “Yet, Durst brought us into production environments at customer locations that did not have factory-trained technicians doing everything. It was actual production. In the hours we watched the Durst printers running, we never saw anyone clean or purge the printhead; they just kept printing.”

“Growth continues for FireSprint, which has traditionally been known as a screenprinter and has committed itself to the large-format digital arena with the purchase of a Durst printer,” added Don Coggswell, regional sales manager for Durst Image Technology.