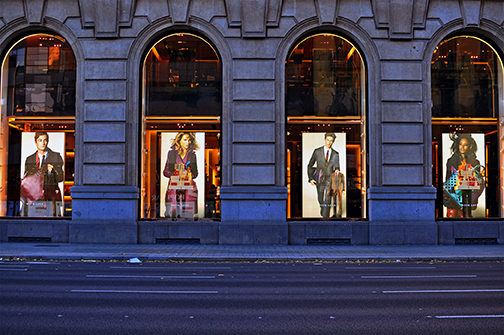 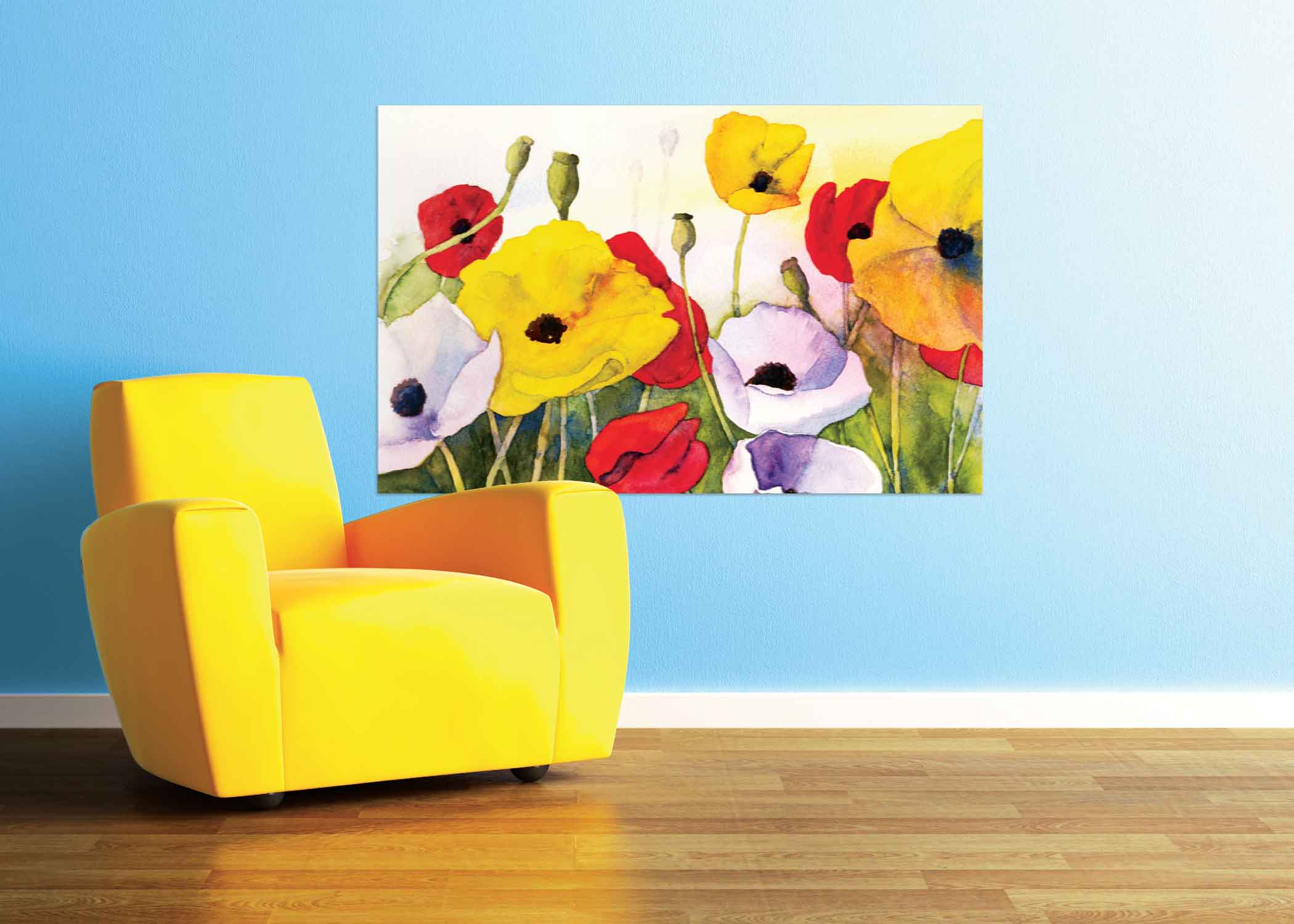 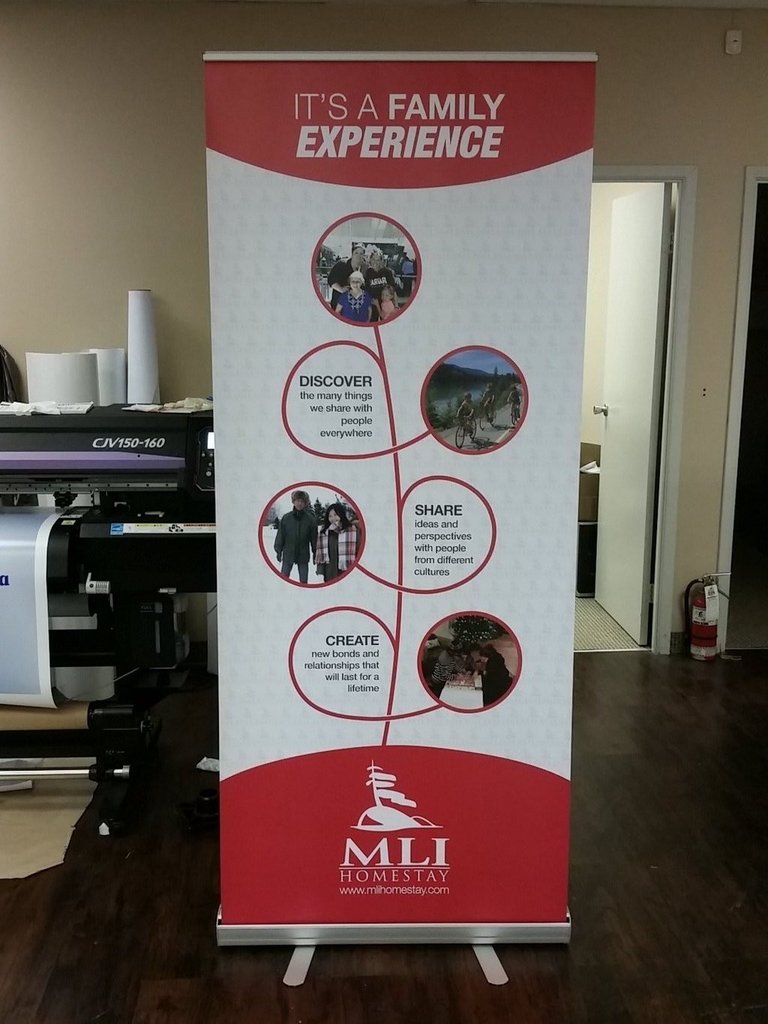 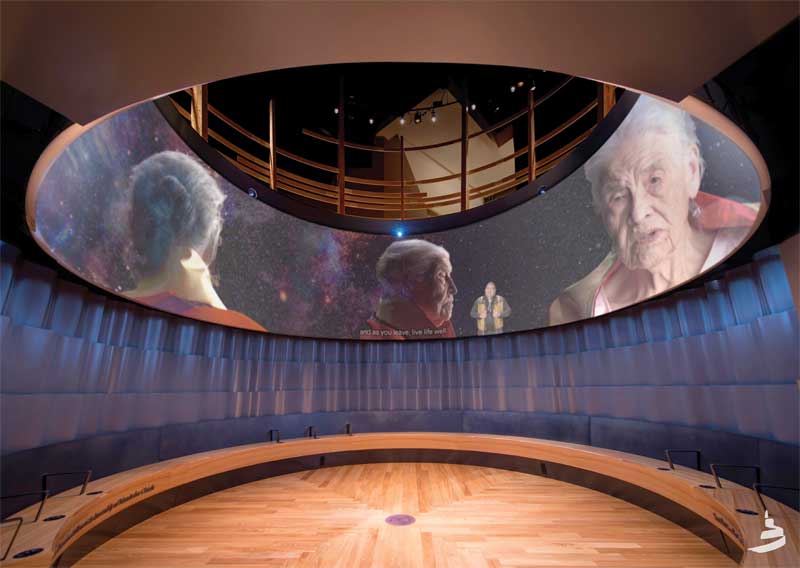 A special production and playback system handles edge-blending of video for the 360-degree theatre in the Indigenous Perspectives gallery.

For the museum’s audio elements, SH Acoustics developed strategies and treatments tailored to the building’s angular spaces, so as to minimize echoes and sound bleed-through. They deployed compact linear speaker arrays, focusing ceiling arrays and bookshelf speakers to help enhance the immersive effects of the museum’s theatres.

In some of these spaces, including the Examining the Holocaust and Breaking the Silence galleries, they embedded speakers into the bench seating, each of which emits sound to the row behind it, time-delayed to combine with the front speakers to localize sound effects to the screen.

“You might say they live at the museum,” Laspa says. “We pull Advance Pro in only as needed, such as for repairs, exhibit pulldowns and warranty work. We also rely on their relationships with suppliers when projectors and other components need to be replaced.”

Indeed, Advance Pro has been able to source different brands of products for different purposes, including projectors from Barco, Panasonic and Christie, media players from BrightSign, speakers from Innovox Audio and James Loudspeaker, liquid crystal displays (LCDs) from Samsung and NEC, mounting systems from Chief and touch screens from MultiTaction and Elo Touch. 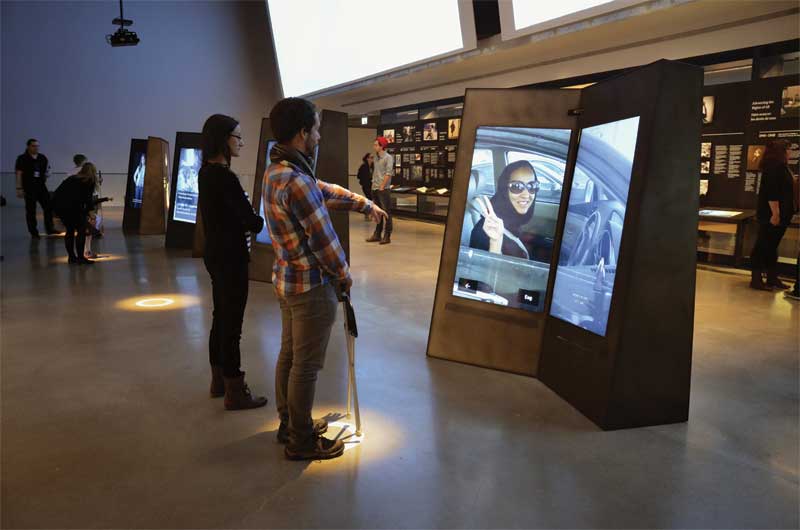 “This is followed by more functional, layered deployments of digital signage in the galleries,” says Gillam.

The first theatre asks and discusses the question, “What are human rights?” Three ceiling-mounted projectors show a video ona scrim where people share their ideas on the subject. A synchronized lighting program allows sculptures and artifacts behind the scrim to become visible at specific points in the presentation, as though to punctuate it.

In the Indigenous Perspectives gallery, a 360-degree theatre is outfitted with six projectors, plus a seventh for any special presentations as needed. A production and playback system handles edge-blending for a video about First Nations’ concepts of rights and responsibilities to each other and the land. In this case, 152-mm (6-in.) speakers were hung behind the screens, aimed down at the audience. An undulating wooden wall was fabricated to provide sound diffusion for the circular room, while compact power-pipe subwoofers were placed under the bench seating to augment the sound further.

The museum’s largest gallery, Canadian Journeys, features a single-projector theatre, embedded monitors and, most notably, a two-storey tall, 29-m (95-ft) wide ‘digital canvas’ that combines two walls of printed graphics with a third wall where images are displayed from four projectors, unifying a grid of faces in a massive presentation mode. The same grid is also rendered on four kiosks for interactive access.

Another interactive exhibit, Rights in the Courts, is featured in a gallery called Protecting Rights in Canada. A variety of court cases involving human rights are showcased on overhead video displays. Visitors get to view the evidence and vote on each case before learning about the real-life court decision.

Another gallery, Turning Points for Humanity, explores the Universal Declaration of Human Rights with four interactive stations, each of which is equipped with a pair of portrait-mode 1.4-m (55-in.) screens and gesture recognition technology.

Throughout all 12 galleries, interactive stations—many using 686-mm (27-in.) touch screens—engage visitors with deeper layers of information and additional text, images and video. For people with disabilities, Electrosonic collaborated with CMHR and the Ontario College of Art and Design University’s (OCADU’s) inclusive design research centre in Toronto to custom-develop universal keypads.