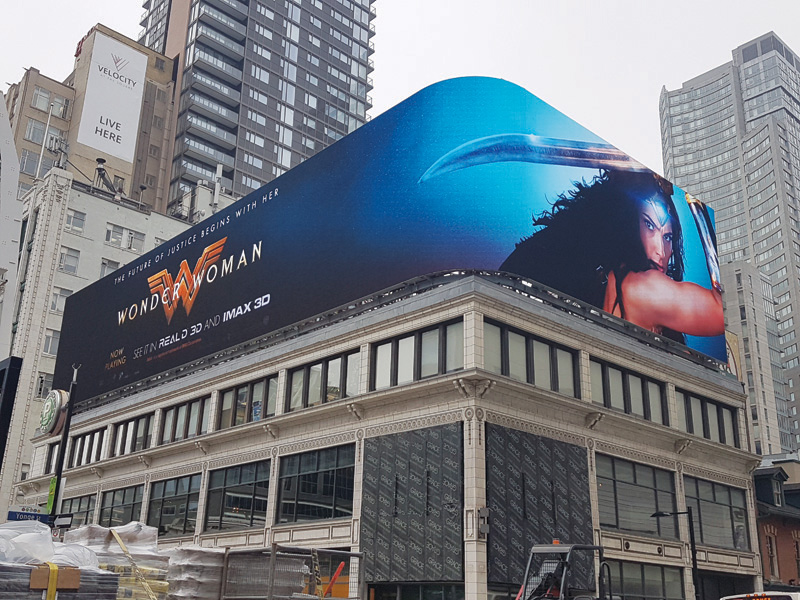 By Peter Saunders
In June, Canadian advertising firm Astral Out-of-Home, a division of Bell Media, announced the debut of a gigantic digital screen near Toronto’s Yonge-Dundas Square (already a hub for signage of all kinds, having been designated by the municipal government as one of the city’s special sign districts).

At more than 7.9 x 57.3 m (26 x 188 ft), the light-emitting diode (LED) billboard tops 454 m2 (4,888 sf). It may not quite be Canada’s largest outdoor digital screen—that record apparently belongs to the 557.4-m2 (6,000-ft) screen mounted right across the street, above the Eaton Centre’s Forever 21 store—but it does seem to be the longest horizontal one and, for that matter, the largest contoured one, as it ‘wraps’ around the corner of the former Hard Rock Café with a three-sided curved shape. This configuration increases out-of-home (OOH) advertisers’ exposure by facing southbound and eastbound pedestrians and traffic.

“This digital wrap represents a major addition to our portfolio,” says Karine Moses, Astral’s president. “The sheer scale of the screen, which synchronizes full-motion video with a dedicated static face, provides flexibility for advertisers to deliver a powerful story and bring their brands to life.”

OOH advertisers are certainly drawn to the area. Located at one of Canada’s busiest intersections, Yonge-Dundas Square sees daily traffic of more than 93,000 pedestrians and 30,000 vehicles and co-hosts annual arts festivals like North By Northeast (NXNE), Luminato and Nuit Blanche. The Eaton Centre also contributes to a total of more than 52 million visitors per year.

Answering the call
Plans for the giant screen predate Astral’s involvement, as it was seen as a way to upgrade the rooftop space previously occupied by a combination of printed and digital faces that were operated by Cieslok Media.  By the time Astral finalized its acquisition of Cieslok earlier this year, a request for proposals (RFP) had already been issued in 2016 for the all-digital structure.

You May Also Like  Illumination: Forecasting the market for LED signage and displays

One of the companies that answered the RFP was Media Resources International (MRI), an integrated sign manufacturing and maintenance company in Oakville, Ont. Its portfolio already featured extensive related experience, such as the construction and installation of a 418-m2 (4,500-sf) three-sided full-motion LED display for the Fallsview Casino in Niagara Falls, Ont.

“We got the job and started to work with Cieslok in advance of the acquisition by Astral,” explains Keith Edwards, chief operating officer (COO) for MRI. “Then we continued to work on the design with Astral before fabricating and installing the screen.”

“MRI was selected because they were the best company to take this project from concept to completion,” says Kevin Martens, Astral’s director of construction. “We worked with them hand-in-hand from design to final installation to meet our deadline.”

“Although our customer changed midway, the specs stayed the same,” says Jeff Rushton, co-owner, president and CEO of MRI.