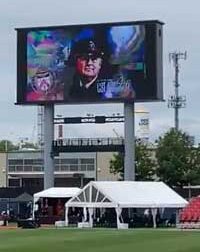 Image of fallen officer Northrup displayed on a digital board.

Two mobile cranes were used to hoist and display a huge Canadian flag at the public funeral march of the fallen Toronto Police Detective Constable Jeffrey Northrup, who was killed while on duty.

The funeral procession and march was held on July 12, starting from BMO Field in Toronto[1], ON. Thousands of police officers from across Ontario, as well as province’s Premier Doug Ford, Toronto Mayor John Tory and Toronto Police Services[2] chair Jim Hart, attended the solemn service.

Huge digital displays[3] of the fallen officer were placed across the ceremony grounds.

Northrup was at the scene of a parking lot disturbance when a suspect is said to have struck him with his car. The officer was taken to hospital where he was declared deceased. The suspect is charged with First Degree murder.

The veteran officer was killed in the line of duty on July 2. He was 55.

Starting his Toronto Police Service career with Court Services 31 years ago, Northrup became a uniformed officer in 1999 and was assigned to 11 Division. He was at 52 Division for the last 13 years and a member of the Chief’s Ceremonial Unit.

Northrup is survived by his mother, wife and three children.